You'll learn that when you cross me, the people you want to protect are the ones who suffer. —Kingpin, We’ve Got a Lead!

Wilson Fisk, known also as The Kingpin, is the first antagonist of Marvel's Spider-Man, a minor antagonist in Marvel's Spider-Man: Miles Morales, and possibly one of the main antagonist of the Marvel's Spider-Man series. An adversary of both Spider-Man and Daredevil for a long time, and later also his adoptive daughter Echo, he is a notorious crime boss who controls most of the organized crime in New York City. Although Fisk is taken out early in the game by Spider-Man and is behind bars during the series' story, the effects and power vacuum he leaves behind can be felt as new villains battle for control of the city. Two years later, he dispatches his men to disrupt peace in the neighborhood of Harlem by attempting to drive out local businesses in an effort to purchase their land in contribution to regrowing his ciriminal empire. He is eventually apprehended by the new Spider-Man and receives additional years on his sentence asa punishment.

Fisk is voiced by Travis Willingham.[2]

Fisk was born around the year 1970.[1] At an unknown point, he started a spice business, where he made his fortune. By 2010, he had become one of the most powerful crime bosses in New York City, secretly controlling the city's organized crime families as the feared Kingpin. As part of his criminal empire, Fisk used several warehouses throughout the city to house resources and men, while operating out of Fisk Tower. Publicly, he posed as a wealthy philanthropist and legitimate businessman.

At an unknown time, Fisk was approached by Norman Osborn to construct a facility for Project GR-27's production. Fisk agreed to build the facility, but at an unknown point learned about the nature of GR-27. Referring to the serum as "Pandora's box", Fisk kept a file on his discoveries hidden in a Nioh statue, likely to blackmail Osborn should the mayor ever threaten his position.

Somewhere around 2010, Fisk, at the age of 40, learned that one of his enforcers was beaten up and arrested by the young vigilante Spider-Man. Despite managing to get his enforcer out of prison via bail, Fisk knew that Spider-Man would be a threat to his operations and made it his mission to kill him. In their first fights, Fisk consistently defeated Spider-Man, keeping his criminal operations secret. As a result, Fisk remained in control of his empire until eight years later.

In 2018, a now 23-year-old Spider-Man assists the NYPD in arresting Fisk after the police obtain enough evidence against him. Spider-Man helps the police raid Fisk Tower, and once inside, he and Fisk engage in an epic showdown. Though Fisk smashes his way through the fight, damaging his penthouse with turrets, hurling giant objects, and even putting his employees in danger, Spider-Man manages to defeat him, though he ends up getting his suit damaged. Fisk is sent to prison, but warns that he was the only person maintaining order in the city and hopes that in one month, the people will wish they had him back.

Though in prison, Fisk still manages to control his empire to a degree from within his cell. However, his absence gives rise to a supernaturally powered, demonic-mask wearing gang called the Inner Demons, who seize Fisk's territory and weapons and begin terrorizing the city. Additionally, many of the cops on his payroll are exposed and arrested, leaving the NYPD short-staffed and underequipped to deal with the rise in crime. Meanwhile, Spider-Man takes down the construction sites serving as fronts for Fisk's drug business, limiting Fisk's ability to pay his lawyers.

Fisk has remained in prison since his arrest, his attempts of escape or release failing. Within a year of his arrest, his company's construction sites, as well as the now abandoned Fisk Tower, are taken over by the Underground. However, one building at Midtown, which was invaded by Inner Demons survives and constructed by a new company and becoming the new Spider-Man's training ground by original Spider-Man from Underground's take over.

With the control he has from his cell, he sends his men to sabotage a community in Harlem, intending to rebuild his criminal empire by a criminal takeover. However, his attempts are thwarted by the new Spider-Man, who eventually uncovers his base of operations. Fisk encounters this Spider-Man as the latter begins shutting down his servers, promising vengeance on Harlem in retaliation before the connection is severed. Fisk's men proceed to attack the holiday party in C.J. Walker Park, though Miles manages to stop the the attack. 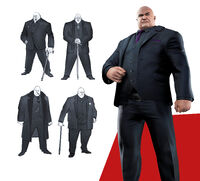 Fisk's appearance can be described in one word as "imposing". He towers over most people and has the weight of over two average men. In his normal business attire, he generally wears a dark suit with a lapel and striped tie.

During her first ever meeting with Fisk as a junior reporter, Mary Jane Watson described it as "standing next to a creature out of folklore or from another world", labeling him as "tall, broad and built on a massive scale than anybody she'd ever seen". His colossal stature is further exemplified by "when they shook hands, she had a memory of her father playing with her, when she was a little kid pretending to shake a troll's hand".[citation needed]

Fisk is a calculating and ruthless individual, tolerating neither failure from his employees nor inconvenience by his enemies. He is generally calm, losing his temper only after repeated failures, and has a tendency to speak down towards his enemies. Fisk seems to have an affinity for Japanese culture: his office at Fisk Tower and auction house are filled with Japanese statues, paintings, and armors (implied to have been illegally smuggled in).

While ruthless and aggressive, Fisk has a sense of duty, acknowledging that his presence kept the criminal underworld in check. He believed that his strictly regulated and highly organized variation of the criminal underworld actually kept most civilians safe from being harmed by hardened criminals. And upon his arrest, he correctly proclaims that within a month, Spider-Man will wish he was back. This turned out to be true, as since Fisk's arrest, the Inner Demons, a zealous Tong organization, began terrorizing Manhattan and Doctor Octopus unleashed a plague on Manhattan with the help of his Sinister Six. These events led to Sable International establishing an totalitarian regime in Manhattan as well as Ryker's inmates establishing themselves in Manhattan. Sable International's totalitarian regime even inspired Hammerhead to instigate a Maggia Civil War.

Despite Fisk's overweight appearance, his body is mostly composed of muscle rather than fat, granting him strength and far higher durability than the average human. He has been shown to be strong enough to break stone, smash a wooden desk, cave in steel pipes, and hurl grown men through brick walls, all with his bare hands, as well as survive falling from several stories and having large blocks of concrete thrown at him.

Aside from the advantages of near-superhuman strength, Fisk is a skilled fighter. He seems to have some skill with swordplay. During his final fight with Spider-Man, he also displays some form of acrobatic prowess. Fisk is fearless and shows great mental fortitude, determined to retain his criminal empire and simply refusing to give up.

A formidable strategist, Fisk "always has a plan". He is highly skilled and knowledgeable in the organization and management of criminal and legal business operations, utilizing a dense network of professional and social contacts to further both his business and criminal ambitions. This is seen through his influence of prominent politicians, other powerful companies such as Oscorp, powerful intelligence agencies like the NYPD (enlisting several corrupt officers on his payroll), as well as his many covert moles and pawns in various places that enact his malevolent bidding for him. His leverage has allowed him to keep his master-criminal status covert and his empire booming for nearly a decade. Even after his incarceration, Fisk seems to remain confident in his eclectic network, continuing to remain in contact with his enforcers whilst securely imprisoned.

Fisk owns several construction sites that his men use to keep his rackets running following his arrest. After the mission Fisk Hideout, Spider-Man can take these bases down to win Base Tokens. Each hideout will have several waves of Fisk's henchmen to defeat, as well as different sets of bonus objectives to complete for extra Base Tokens. The overall goal is to clear the area of enemies.

There are a total of six "Fisk Hideouts" around the city. Taking down all six prompts a phone call from Fisk himself, who warns Spider-Man that his actions will have consequences.

Fisk was one of the first villains that Peter Parker ever encountered as Spider-Man. Peter has spent eight years trying to get Fisk behind bars, and describes the crime-lord as his biggest nemesis. Based on accounts from Mary Jane and Peter, Fisk has nearly killed Spider-Man on several occasions, slicing him open with a katana in their first fight.

In general, Fisk loathes Spider-Man for his constant and relentless interference, claiming he's "everything that's wrong with the city". He also hates the wall-crawler's sense of humor and childish jokes, but respects him as a great enemy nonetheless. When Spider-Man finally does incriminate Fisk and sends him to prison, he soon finds himself in the bizarre position of saving Fisk's men from the Inner Demons, while also realizing that Kingpin did kept order in the city, despite being a crime-lord. Spider-Man later asks him who the Demons' leader is, and Fisk says that if Spider-Man kept his men alive, he would tell him.