1500
College Buddies is a side mission in Marvel's Spider-Man. It is the third such mission in the series involving Phillip Chang and missing students. Players will need to complete Tick Tock to unlock this mission. The mission starts in Greenwich.

This mission takes place at night. Talk to Phillip Chang to get started. Steven Hopkins is missing, but Phillip is concerned because some of Tombstone's gang started dealing drugs in Steven's neighborhood recently. Steve hated it but was too scared to do anything, but since he is possibly corrupted currently, he may have reacted and attacked them.

Phillip gives Spider-Man another image, this time from the Upper West Side. Head north to the west side of that district. Head past the tennis court, then defeat the thugs in the area. Steven is there, but he has been corrupted by his mask and takes on Spider-Man. Defeat him to end the mission. 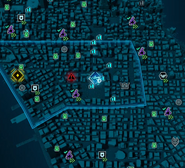