Norman Osborn is a prominent supporting character in Marvel's Spider-Man. The owner and president of Oscorp, he is also the mayor of New York City who hides his past behind a wall of lies. Under constant threat of attack, he has hired Sable International to protect him, expanding their role so they can enact martial law when the prisoners from The Raft and Ryker's Island escape.

Norman is voiced by Mark Rolston.[2]

Born in Hartford, Connecticut,[1] Norman Osborn became friends with Otto Octavius after being assigned as lab partners in college. The two went on to found Oscorp Industries, hoping to change the world. With Norman's natural charisma and Otto's scientific genius, Oscorp quickly became one of the top scientific corporations in the world. In the 1980s, Norman met and married an environmental attorney named Emily.

As Otto would reveal years later, Norman became increasingly obsessed with genetics, likely in response to Emily's diagnosis with Oshtoran Syndrome in 1984. It is presumed to be around this time that Norman ordered the development of GR-27, an experimental genetic therapy, in order to cure his wife's disorder, ignoring the obvious risks of the imperfect treatment.

In 1986, Norman had GR-27, which had earned the nickname "Devil's Breath" from the lab technicians, administered on then seven-year-old Martin Li, who had come to Oscorp with his parents for a medical consultation. The treatment went horribly wrong: Li somehow gained superhuman powers, causing an explosion that killed the boy's parents. The incident resulted in Otto quitting Oscorp, as well as ending his friendship with Norman. Otto would go on to start his own company, Octavius Industries.

Around 1995, Norman and Emily had a son named Harold (nicknamed "Harry"). Sadly, Emily succumbed to complications of Oshtoran Syndrome before Devil's Breath could be completed, around the early 2000s.

Years later, Norman was elected Mayor of New York City, while still managing Oscorp as its CEO. During his tenure as Mayor, Norman carried out many of his promised initiatives, from an environmental research program to a city-wide crime monitoring system.

Despite previous claims to have no active part in the managing of Oscorp, Norman still has close ties to the company and is able to control their actions. He is first seen in person at Octavius Industries using the latest accident at Otto's lab as an excuse to have his grant funding revoked and try to confiscate all materials and research. He tells Otto through a thinly veiled ultimatum that he can have access to funds and equipment to continue his research if he returns to Oscorp.

Norman is initially the target of attack by Li, who holds the Mayor responsible for his "negative" powers and the death of his parents. Norman's shady past is revealed when investigative journalist Mary Jane Watson uncovers a videotape that shows how he created the Devil's Breath and used it on an unsuspecting young Martin Li, transforming him into Mister Negative.

Norman denies all wrongdoing, hiring Silver Sable and her PMC Sable International for protection. After Li is apprehended by Spider-Man, Norman claims credit to boost his campaign, and this enrages a now-unhinged Otto Octavius, who blames him for his financial burdens and stealing his research. Donning the mantle of Doctor Octopus, he steals the Devil's Breath and releases it in Times Square, infecting hundreds of thousands of New Yorkers. He then frees the convicts from prison, including Li, forming the Sinister Six and enlisting their help in dismantling Norman and his empire.

Norman is eventually captured by Li while supervising production of an antiserum for Devil's Breath. However, Spider-Man intervenes as Norman is about to be executed and defeats Li, only for Doctor Octopus to arrive and capture Norman himself, intent on forcing him to confess to his "crimes". When he refuses and taunts Otto by claiming he will always be a failure, he is thrown from the top of Oscorp Tower, but is rescued by Spider-Man. Norman retreats to safety as Spider-Man goes to confront Otto.

Within three months of Doctor Octopus's defeat, Norman has resigned as Mayor in disgrace. He is seen in his secret lab, looking at his son Harry. Rather than being in Europe as everyone believes, Harry has been put into a coma until his father can find a "cure" for his illness, which he inherited from his mother. Expressing his disappointment that Devil's Breath is no longer an option, Norman promises that he will find the cure. However, as he puts his hand on Harry's medical tank, he fails to notice the black substance inside the tank mimic his movement and move towards him, seemingly alive. 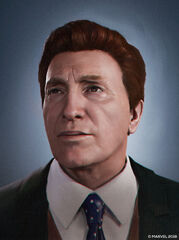 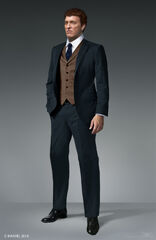 Norman is an older man with graying red-brown hair. In spite of his age, he has a fairly athletic physique. He is typically dressed in a suit with a green, pinstripe jacket, orange vest, and black pants with black shoes. During Officer Jefferson Davis' funeral, he wears an all-black suit with a knee length coat.

Norman is a selfish, ruthless, arrogant, and corrupt businessman, craftily disguised behind a political mask. A man of considerable wealth, he often spends money illegally for his own interests and abuses his position, violating citizens' rights to hire a private military group in place of the NYPD or carry out clandestine experiments. Norman has a powerful self-righteous streak, refusing to accept responsibility for his mistakes.

Despite his ruthless nature, he deeply loves his son and deeply loved his deceased wife, and possibly cares about those close to him or his family. It is revealed that his desire to perform genetic experiments are not for his own selfish needs, but so that he can find a cure for his ill son.

The co-founder and CEO of Oscorp, Norman specializes in scientific pioneering. He is recognized for his technological innovations in the field of medical science. Norman is also a business and political mastermind, having transformed his company into a multibillion-dollar multinational corporation as well as being elected the Mayor of New York City.

With his immensely large fortune, Norman is able to employ cutting-edge research facilities that secretly develop the methods to rehabilitate his ill son, and hire the services of Silver Sable's elite task force. Norman has also developed and has access to technologies which are deemed ahead of their time, such as experimental regenerative nanotechnology, experimental focus enhancers, and other experimental technologies, as well as small highly accurate missiles on display at Grand Central Station. Of particular note are his plans for a small drone/glider for the purposes of carrying medical supplies into war zones. Additionally, he has a working prototype for a combat helmet which can see structural weaknesses and small grenade-like prototypes in his penthouse.

Norman's unmatched political gamesmanship, natural charisma, and high social confidence enable him to masterfully appeal to popular desires and prejudices when addressing people, often championing the cause of the common people and gaining their support. He is often quick to use various events throughout his city towards advancing his political career, such as organizing an award ceremony for Officer Davis after the latter is lauded for his heroism, which is only to boost Norman's re-election campaign.

Harry Osborn is Norman's only son. While Harry loves his father, he is aware of Norman's controlling and dishonest tendencies, although his love for Harry is genuine. Norman's desperation to save his son caused him to continue the development of Devil's Breath, ignoring the obvious risks of a pandemic. Even in dealings with his son regarding Oscorp's research stations, which Harry cared about deeply as they were his way to honor his mother, Norman's focus was on how the results could benefit Oscorp rather than the greater good they could do.

Norman met Martin Li as a child when he came to Oscorp for a medical consultation. Norman authorized usage of the GR-27 prototype, which caused the accident which gave Li his powers and killed his parents. As a result, his treatment led to Martin Li becoming Mister Negative with plans to take Norman down using his Inner Demons. Even after being confronted directly by Mister Negative, Norman insists that what happened was an accident and that he was trying to help him, although his pleas fall on deaf ears.

Norman and Otto Octavius met as lab partners during college. They became close friends, and went on to found Oscorp together. Their relationship was labeled by the media as "the friendship re-shaping our world". Otto would eventually leave the company following Martin Li's accident, after which Norman would take credit for Otto's work and overshadow Otto's achievements, forcing Otto to rely on grants and ultimately triggering his transformation into Doctor Octopus. However, as indicated by a photo found in his apartment, Norman still valued his relationship with Otto until the latter's turn to crime, and his efforts were likely an ill-conceived attempt to reach out to his former friend.

Normal Osborn is most notable for his alias as the Green Goblin. The character made his first appearance in Amazing Spider-Man #14 (July 1964).