Martin Li, nicknamed by the press as Mister Negative, is the secondary antagonist of Marvel's Spider-Man. Li is the founder and owner of the F.E.A.S.T. homeless shelter. Secretly, he is the ruthless leader of the Inner Demons who has the ability to harness negative energy at will. Li has a personal vendetta against Mayor Norman Osborn, which leads him to terrorize the city. Following his defeat, he becomes a member of the Sinister Six, organized by Doctor Octopus.

Martin Li was born somewhere between September 18 and December 31, 1978, in Dali, China.[1] He and his parents immigrated to the United States in his early childhood. In 1986, at the age of seven, Li and his parents came to Oscorp for medical consultation regarding an unknown medical condition. On September 19 of that year, Oscorp's co-founder Norman Osborn had Li injected with the experimental GR-27 (codenamed "Devil's Breath") serum. The treatment triggered a reaction that altered Li's physiology, granting him superhuman abilities and causing an explosion that killed his parents.

The orphaned Li spent the rest of his childhood in foster care in Manhattan. At the age of 18, he returned to China, where he made a fortune in the shipping industry. When he came back to New York nearly a decade later, he was already a billionaire. Rather than living off his fortune, Li founded his F.E.A.S.T. homeless shelters to ensure nobody would ever feel forgotten or abandoned.[3] He opened his first F.E.A.S.T. shelter in Chinatown in 2013.[4]

Li is the employer of Aunt May, who serves as the operations manager of F.E.A.S.T. All outward appearances indicate he is a generous man, but secretly he runs the criminal organization the Inner Demons. With the arrest of criminal Wilson Fisk, Li moves swiftly to take advantage of the resulting power vacuum to take over his territory and weapons, preparing to move on now-Mayor Norman Osborn.

Obsessed with exacting revenge against Osborn, he intends to uncover his lies and use Oscorp's own Devil's Breath against him and the city. He and the Demons attack one of Osborn's re-election rallies carrying explosives, killing Jefferson Davis and countless others. Prior to fully committing to destroy Osborn, Li makes Aunt May the new head of F.E.A.S.T. He then steals the Devil's Breath from Oscorp and attempts to release the gas on Grand Central but is foiled by Spider-Man.

After his arrest and imprisonment, Li is freed by Doctor Octopus and becomes one of the Sinister Six. Under Doctor Octopus's orders, he kidnaps Oscorp scientist Dr. Morgan Michaels to take the Devil's Breath antiserum from him. Li also captures Osborn and confronts him. Before he can kill Osborn, Spider-Man follows him into the lab and defeats him in battle. 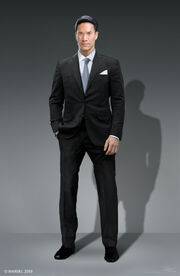 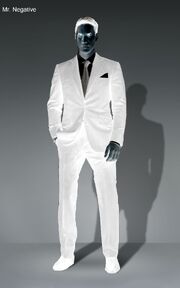 Li is a middle-aged Chinese-American man with a muscular build and clean shaven face. His standard attire is a black suit and tie with a white handkerchief in his breast pocket.

In his "Mister Negative" form, Li's appearance resembles a photo negative version of himself, with black skin, white hair, and glowing eyes. His clothing takes on the same transformation, and seems to react to light in an inverse manner.

There are two sides to Li's personality. The good side is that of a generous altruist and good-natured humanitarian: calm, pleasant, and humble in demeanor. Instead of using his incredible wealth to live a life of luxury, Li chose to create F.E.A.S.T., the most extensive and well-funded charity organization in New York, so that no one would suffer abandonment, hunger, and homelessness like he did when he was a child. Li takes great pride in his charitable work, seeing F.E.A.S.T. as his greatest accomplishment and a way of honoring his parents.

Li's evil side sees him as a ruthless criminal and fanatical terrorist leader, who commands the fearsome Inner Demons in an almost cult leader-like manner, claiming that he is a hero who camouflages himself as a monster to do justice. Aggressive and short-tempered, this side of Li is driven by his hatred for Norman Osborn for indirectly causing Li to murder his parents.

Li is aware of the duality of his character, acknowledging that he has fallen "out of balance" in his quest for revenge.

Mister Negative possesses the ability to generate and control a highly destructive electric negative energy. He typically uses this energy to project powerful blasts from his hands, or to charge up swords, combining his dark powers with his swordsmanship skills in battle. Mister Negative also displays increased physical attributes in terms of reflexes, resilience, and strength. He is able to take extreme amounts of physical trauma without major injuries and can move in small dashes of superhuman speed, akin to teleportation. His attacks also have great range.

Mister Negative appears to have a mind control ability. With just a touch, he is able to "corrupt" people, effectively bringing them under his control, or give himself even greater power through amplifying his victims' negative emotions. He can additionally gift small portions of his powers to his followers. Furthermore, Mister Negative's mind control ability allows him to create realistic illusions in his victim's mind, such as zombie-like holograms that he creates to use against Spider-Man when the two battle. While truly angered, he is able to generate a large holographic demonic entity that he weaponizes against Spider-Man during their final battle.

Publicly, Li is known for his inspiring philanthropic leadership. In addition, he has a college degree in art and has a detailed knowledge of history, historical art and relics as well as arcane lore.

In control of New York's criminal underworld, Mister Negative is often accompanied by several henchmen, known as his Inner Demons, who wear Chinese masks and use electrified versions of swords, whips, knuckles, and various other weaponry, including guns stolen from Fisk's weapons stashes. Similar to Li, they are incredibly resilient to even the most lethal attacks. Their loyalty to Li is unquestioned, as they are directly under his control.

Mister Negative's primary sidearm is a double-edged Chinese sword called a jian, commonly used in tai chi and other Chinese martial arts. His skill as a swordsman coupled with his superhuman physical attributes and energy manipulation abilities make his use of this weapon unquestionably lethal.

Norman Osborn was responsible for Li's exposure to Devil's Breath, and, as a result, Li's powers and the death of his parents. Li would hold a grudge against Osborn for the incident, which only grew as Osborn avoided culpability for his actions. Eventually, Li gave into his hatred and began plotting a lifelong vendetta against Osborn.

Leading the Inner Demons terrorist group, Li threatens and harms countless New Yorkers, including innocent civilians, all in order to get to Osborn. When he finally faces Osborn in the Devil's Breath research lab, he prepares to slowly and painfully kill the man he deems a "piece of scum". His hatred for Osborn leaves him deaf to Spider-Man's attempts to reason with him, demanding that Osborn face "true justice" and suffer for his crimes.

Otto Octavius first encountered Li when the latter came to Oscorp for medical consultation. While Octavius was unable to stop Li from being exposed to GR-27 and accidentally killing his parents, it appears that he was in touch with Li for some time, providing him with medication to help him suppress his powers.

As the game's story progresses, Li's actions come to inspire Octavius to pursue his own plot against Osborn, and Li readily joins him. When Li fails to secure the Devil's Breath antiserum, he is thrown aside by the increasingly unstable Octavius, who deems him useless before taking the antiserum himself and leaving Li to the authorities.

Li holds Aunt May in great respect for her generosity, kindness, and contributions at F.E.A.S.T. He states that May inspires him to be humble and altruistic. When he is about to leave to pursue his vendetta against Norman Osborn, he asks for her to continue running and expanding his F.E.A.S.T. operations, as he is truly proud of their charitable accomplishments for the people of New York.

Before he leaves to move forth with his vendetta, Li leaves a note for May in his office, confessing to his crimes as a terrorist, but promising that the work they have done together is true, and asking that she stay.

Li and Peter Parker appear to have a friendly relationship, fostered by their mutual respect for Aunt May. Li admires how dedicated Peter is to helping others, and acknowledges that Peter reminds him of himself when he was younger. However, once Li begins his agenda, he does not hesitate to have Peter attacked to keep him from following. Spider-Man ultimately defeats Li after he manages to break free from Mister Negative's corruption.