This wiki currently has 325 articles and 969 pictures.
Warning: the wiki contains unmarked spoilers.

About
Marvel's Spider-Man Wiki is a comprehensive database focusing on the Marvel's Spider-Man video game series developed by Insomniac Games, and released on PlayStation 4, PlayStation 5 and PC. The wiki is a collaborative community that anyone can edit, dedicated to collecting all information related to the franchise, such as the storyline, gameplay, characters, locations, and more! See here for more details
Contents 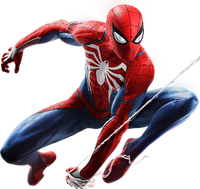 Peter Parker, who adopts the secret identity Spider-Man, is the main playable character and protagonist of Marvel's Spider-Man. He is a twenty-four-year-old former research assistant from New York City who fights crime under his alias, using his spider-like superhuman abilities and web gadgets of his own design.

Peter gained his powers after being bitten by a radioactive spider at the age of fifteen. Employing a secret identity, he settled on using his newfound abilities to protect the citizens of New York as the masked vigilante Spider-Man. Eight years into his superhero career, Peter has become an experienced and masterful crime fighter, but struggles to balance his superhero and personal lives.

Spider-Man is aided in his crime-fighting by intrepid Daily Bugle reporter Mary Jane Watson, his ex-girlfriend, and NYPD Captain Yuri Watanabe. In his civilian life, Peter is supported by his Aunt May, and is employed by his friend and mentor, the respected scientist Dr. Otto Octavius.

More about Peter Parker
How to help
Not sure where to start?