1500
Internet Famous is a side mission in Marvel's Spider-Man. It is unlocked after completing the story mission Straw, Meet Camel. The mission begins in Harlem.

This mission begins at night, so the time of day will change. Spider-Man talks with a woman at the mission's starting location to begin Screwball's photography challenge. Spider-Man will need to locate and take photographs of matrix barcodes on walls throughout the city. Screwball herself is streaming the challenge and when Spider-Man considers backing out, she lets him know there is a kidnapped hostage's life at stake.

The first code is on the wall behind the woman. Photograph it to begin. Each code will provide the location of the following one, marking it on the map. The second code is just over 500m away but is too large to photograph from the ground. Spider-Man will require a higher perch to get a good view. Screwball will send some of her "followers" to pay Spider-Man a "visit". Defeat them to move on.

The third code will require some distance and maneuvering as it appears over two buildings. After the picture is taken, Screwball will challenge Spider-Man to stop three bombs from exploding on three different rooftops. There is no way to disable them, so fling them into the air and shoot them with webbing, causing them to explode safely.

The fourth location is not a code, but the victim herself, only it's not a victim at all. It's Screwball and more of her "followers". The police arrive once they are defeated to arrest Screwball, but as she points out, it was her fans who did the damage, not her. 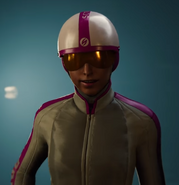