Hardy's Stolen Art are collectibles featured in "The Heist" downloadable content for Marvel's Spider-Man. Unlocked after completing the mission Long Lost Loot, these are art pieces stolen by former cat-burglar Walter Hardy and hidden throughout the city by him. There are ten different art pieces scattered around the map: one in Central Park, two in Greenwich, three in Hell's Kitchen, two in Midtown, and two in Upper East Side. You'll be using locator to find stolen paintings.

1. "Blood Shore". It's located in an exhaust vent on one of the southern roofs in Greenwich. After destroying the vent, a random pigeon appears and steals the painting, leaving you no choice but to chase it. After that the painting is yours.

2. “Pasture of Heaven”. This painting is hidden in exhaust vent on the northern roof. Destroy vent and it's yours.

1. "Hiram's Remorse". Long story short: there is a white bridge, go under it, find white trailer, above the trailer is a scaffolding, pull them down, go inside sea container and, at the end of it, destroy power box. Boom, painting is yours.

2. “Modern Education”. On the almost-border between Hell's Kitchen and Midtown there are a church. On the church is tone steeple. Pull down the steeple to get the painting.

3. "First Light”. Head to the train tracks in northern pat of the district and destroy the Power Box beside the tracks to get the painting. But be careful! Noone has changed train schedule so noone is stopping them from killing you either!

2. "Hope and Loss". Make your way to Time Square, and look for the tall central advertisement with the Haute Unlimited ad on it. Beside this ad is a vent: destroy it to get the painting.

1. "Three Sheets". Look for a large apartment building. On top of the building is a vent you can destroy. Do it and get painting.

2. "The French Revolution". Find the huge grey apartment building, climb along the west facing side to reach an air conditioning unit, destroy it to get the painting.

1. "Victory". This painting is located in the northeastern portion of the park. Look for a brick building by a marsh. Make your way to the roof of the building and pull down the chimney to get the painting.

NYPD's Detective Mackey of the Greenwich precinct asks Spider-Man to track down paintings that were stolen by Walter Hardy when he still operated as the "Black Cat". Mackey thinks that Hardy could be using special isotope to locate his stolen paintings. He tells Spider-Man that if he helps him find the paintings, he would close the case and retire in peace. Spider-Man, of course agrees to help. As Spider-Man looks for the paintings, Mackey relays Walter's backstory to the hero. Walter's skill as a thief eventually caught the interest of the Maggia criminal organization. When Walter refused to join the Maggia, he let himself get arrested to protect his daughter and supposedly died drowning in a failed escape attempt from Ryker's Island. After collecting last painting Mackey calls Peter and tells him how much it means to him and asks him to look out for new Black Cat, leaving Peter with mixed feelings.

After collecting all of the stolen art, the side mission Like a Fiddle is unlocked. Spider-Man returns to the precinct and discovers from the detective's disappearance that Mackey is actually Walter, who faked his death and took on an alias to ensure that the Maggia wouldn't go after his daughter, Felicia Hardy. Before he leaves, Walter asks Spider-Man to take care of the new Black Cat. 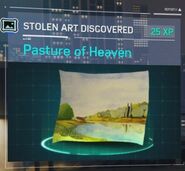 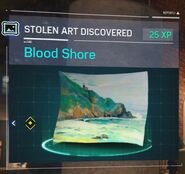 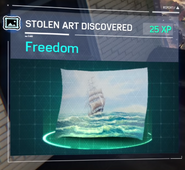 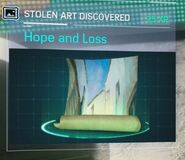