WILL SCORPION STING OR SING? 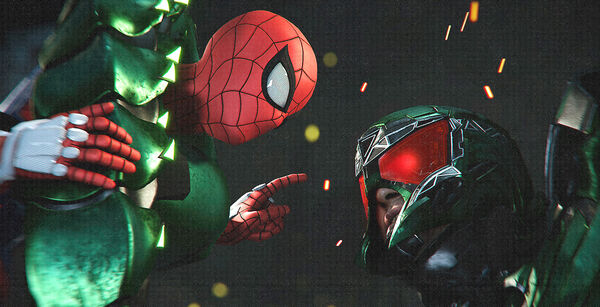 MacDonald “Mac” Gargan, aka the deadly mecha-criminal Scorpion, has finally been apprehended by police, thanks in no small part to the heroic efforts of Spider-Man. Wanted for multiple counts of criminal activity, including attempted murder and attempted kidnapping, the venom-tipped Super Villain is now due to stand trial.

While the poisonous public enemy is known to be the silent-but-deadly type, the district attorney isn’t letting him go so easy; prosecutors are expected to put considerable pressure on Gargan tomorrow to speak for his crimes. Regardless of whether Gargan admits to the list of criminal charges he’s racked up or not, it’s a no-brainer: Scorpion’s one-way ticket to maximum-security prison the Raft is punched.

Findings from the latest polls regarding Mayor Norman Osborn’s approval ratings show high favorability amongst New Yorkers. This comes as no surprise as the Mayor has proven his outstanding dedication to the improvement of our great city.

Unlike his predecessors, Mayor Osborn has carried out many of his promised initiatives, from an environmental research program to a city-wide crime monitoring system; And these are just two promising items from his docket of initiatives.

The CEO of Oscorp has clearly shown he’s capable of not only taking a government position, but following through on his promises as well. And with the rigid support of New Yorkers behind him, it seems Mayor Osborn has the momentum to continue doing just that.

Despite the Mayor’s crime monitoring system, City Hall is reportedly communicating with Silver Sable, head of Symkaria-based security force Sable International. Rumor has it a potential contract is being discussed to bring her guards to the city in an effort to “bolster” local law enforcement.

Sable International is known for intervening in European countries that struggled against rising crime and other internal social issues. Yet, the organization has an alarming track record of overstepping their boundaries, often intimidating civilians and disregarding local law enforcement’s policies altogether.

Is crime so bad we have to resort to this? The Mayor’s new crime monitoring system hasn’t even truly launched; Officials should give it a chance before calling on dangerous and unpredictable foreign forces to supplement New York’s Finest.

Under mounting pressure from city officials, Mayor Osborn has finally announced his departure from Oscorp — overseas. The Mayor revealed in a press conference that he will no longer manage Oscorp’s international affairs, appointing his young son Harry Osborn as his international successor.

Osborn’s appointment was long overdue. Immediately after graduating from Empire State University at the top of his class, the young Osborn successfully pitched a revival plan for his late mother’s research labs.

In his new role overseas, Harry Osborn is primed to manage all of Oscorp’s European offices and projects. While New York City will miss its prodigal son, we’re already excited to see the greater good he’ll undoubtedly do for the world at large.

The struggle for freshly graduated millennials is about to get real as city rent suffered another jarring increase. As reported previously, young professionals were going broke from the city’s incredible rental rates, with many blaming Spider-Man’s recklessness for the market impact. But what about the real destructive forces — the masked maniacs he’s defended us against?

Spider-Man has defeated every one of the costumed criminals who have declared war on New York and wreaked subsequent havoc. Had the web-slinger not shown up eight years ago, there wouldn’t be a city to hike rental prices in the first place.

Besides, the rebuilt skyline is always better than the last thanks to construction titan Wilson Fisk. He’s reassembled the rubble from practically every corner of the city — even in the smaller, once-affordable boroughs. It’s no wonder debt-ridden millennials are draining their savings to keep up.

New York City was once the place for starry-eyed youngsters with sky-high aspirations. However, as prices soar ever higher with no end in sight, for many those dreams remain just that: dreams.

Unbelievably, a new gang has arrived in our already crime-riddled city — and the Daily Bugle is the first with emerging details on the masked newcomers.

Wearing black-tie suits and terrifying Chinese masks, this new gang of “well-dressed demons” is terrorizing citizens. While no official reports state where the group came from, it seems they have made Chinatown their headquarters. Could it be that international crime is carving out a new home in our city?

While locals have expressed their fears, New York City’s billionaire philanthropist Martin Li feels differently. “Groups like that are after thousands of dollars in money. Many in this area cannot afford that, especially those in the F.E.A.S.T. shelters. If it’s money they want around here, I’m afraid they’ll be disappointed,” he says.

While Li’s statement carries truth, many are wondering just how long their pocket money is safe before these metal-masked goons start shaking down citizens for their loose change.