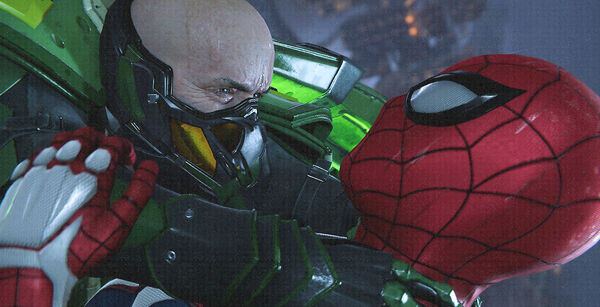 Adrian Toomes, aka the high-flying Vulture, used his day in court to crow for his crimes. Upon taking the stand, Vulture screeched about Spider-Man instead of owning up to his criminal behavior. Toomes claimed the masked vigilante was the “true mastermind” behind his dastardly deeds. The jury humored Toomes, as it’s a well-known fact Spider-Man was the very one to apprehend the bald buzzard for the police. With a unanimously guilty verdict and his wings clipped, the bird-man can warble all he wants about his innocence from his personal cell in the maximum-security prison, the Raft.

Mayor Norman Osborn announced the brilliant scientist behind the revival of his late wife’s research program — it happens to be none other than their young entrepreneurial son, Harry Osborn.

An idea once thought impractical, the program was a passion project of young Harry Osborn, who reportedly dedicated the past few years to proving out the potential of the rooftop labs. According to materials distributed by Oscorp, the rooftop labs were primed to assess city smog levels and monitor clean water systems, among other environmental factors. When the idea was presented to City Council, Harry’s project was not only awarded a generous grant, but became a centerpiece of his father’s citywide improvement initiative.

Environmental advocates anticipate positive change throughout New York City from the labs’ findings, with the hopes that the program becomes an example of the future of clean, sustainable city living.

The Spider-Menace’s influence over the city is out of control. Childrens’ costumes and Halloween masks are one thing, but when copy cats are prowling the streets in bargain store costumes, it’s a problem! It seems another side effect of his unchecked “vigilantism” comes in the form of powerless imitators running amok.

Sure, they’ll get the few perks of wearing his mask: fan selfies, freebies from spider sympathizers. They won’t be so lucky when they come across any one of the webhead’s enemies. One moment they’re squeezing ketchup on their free frank, and the next they’re receiving the kiss of a big burly fist from one of Spider-Man’s angry adversaries.

I implore you all to leave crime-fighting to the courageous men and women of the police force. As if one Spider-Menace wasn’t enough, they sure don’t need a militia of costumed amateurs harassing people on the street. And the Spider-Brat certainly doesn’t need any more encouragement than he’s got!

Wilson Fisk returned from his business trip to Japan for the grand opening of Fisk Tower. Fisk himself sliced the symbolic opening ribbon strung in front of the entrance, appearing unfettered by the recent allegations framing him as New York City’s criminal “Kingpin.”

Just a short while ago, the Daily Bugle was the first to report that Wilson Fisk’s offices had been searched in an effort to put the “Kingpin” rumors surrounding him to rest.

When asked for comment about the scandal, Fisk’s only response was a coy smile, a sip of his brandy, and a referral to his lawyers. While the CEO celebrates his new self-titled high-rise, the Police Commissioner is in talks with Police Captain Yuri Watanabe about future protocol for investigations.

Everyone has a past. Yet wealthy businessman Martin Li seemingly doesn’t. The Daily Bugle investigated just how he became New York City’s most beloved philanthropist.

Turns out, Li epitomizes the American Dream. As an orphan, Li bounced between Manhattan foster homes before disappearing to China, the homeland of his immigrant parents. Nearly a decade later, Li returned with millions of dollars and a big heart. Upon his arrival, Li founded his F.E.A.S.T. shelters to ensure nobody ever feels forgotten or abandoned.

Li’s mysterious past resembles that of the costumed crime-fighters protecting our neighborhoods, minus the mask and suit. In fact, Martin Li could be the everyday hero we’ve waited for.

WE LOVE HIM NOT... MOSTLY
City split on Spider-Man
By Betty Brant

Since swinging into New York City years ago, Spider-Man has developed quite the reputation — for better or for worse. His small fan base claims thugs would’ve sacked the city if not for him.

But critics claim he’s destructive and careless. “Our taxes have increased thanks to his recklessness! Some hero,” grumbled one older Manhattanite.

Amongst the naysayers is Mayor Osborn, who refuses to believe the web-slinger is on our side. As previously reported, the Mayor has several plans in development, aimed at curbing our growing dependence on Spider-Man.

Are we ready for a Spidey-free city? Will we ever not need — or want — him anymore?