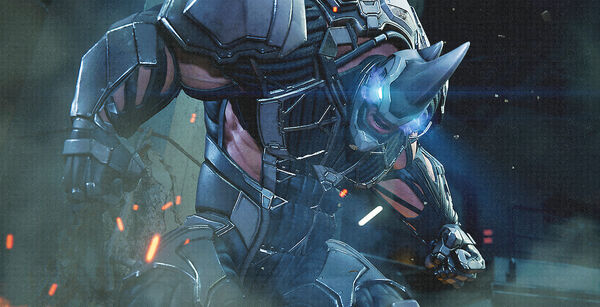 ...But rumble causes $100 million in damage
By Ben Urich

Spider-Man collided with Rhino head-on as the armored brute barreled through a caravan of armored cars while attempting to make off with millions in gold bullion. The brawling pair made the corner of 49th Street and 5th Avenue their arena, slinging signs and city property at each other.

Spider-Man ultimately subdued the horned hot-head, but only after the destructive duo razed an entire city block and pulverized the city’s beloved ice rink. Now that Rhino has been shipped off to the Raft, New York City’s maximum-security prison, one question remains: will taxpayers pick up the multimillion-dollar tab for Spidey’s latest damage?

Law enforcement has put up with Spider-Man’s “heroic” antics for far too long. His continuing presence has risked the very mission and reputation of New York’s Finest.

Just when did the Police Commissioner ever express a need for sidekicks? From what I remember, never. Instead of working alongside the brave men and women on the police force, the amateur vigilante slips on a mask and swings through the city dealing out his own reckless form of justice to the city’s foes.

Let us not rely on this masked menace to do the job of individuals who have trained years to do! If he’s serious about ridding New York City of crime, he should follow law enforcement’s lead and fight crime the legal way: with a uniform and badge!

Biochemists are working hard to crack the formula, whose effects supposedly alter users’ appearances. Terrified eyewitnesses claim that users’ skin flushes gray and hardens, quite literally as if they’ve turned to stone. Others report users break into fits of rage, inflicting violence against innocent citizens, and even themselves.

For the safety and well-being of all, health officials are urging those suspected of using Grave Dust to seek help immediately.

A F.E.A.S.T. FOR ALL
Thriving shelter approaches fifth anniversary
By Ben Urich

When asked about his success, Li simply says, “It’s not to what do I owe success, but to whom.” Li gives all credit to faithful full-timers like May Parker, who he says are the real heroes keeping F.E.A.S.T. functioning on a daily basis.

Li has no celebration plans, stating F.E.A.S.T. will treat its fifth anniversary like it did its first day: serving up comfort and help to those who need it most.

As the premier wonder of our local prison system, the maximum-security institution known as the Raft should be the best place for incarcerated super villains. But rumors are swirling about its supposed faltering security, fueling public fears that the impervious prison is on the fritz.

In an attempt to quell worry, prison officials have released a statement detailing plans for meetings between the warden and city and state officials to formulate new benchmarks for incarcerated super villain supervision.

With work scheduled to begin immediately, citizens — and prison employees, for that matter — can breathe a little easier knowing any faults found in the fortress are being addressed.

Rumors have been swirling around construction magnate Wilson Fisk. There are whispers that Fisk and his construction enterprise feed the criminal underbelly of New York City, with anonymous tips claiming Fisk himself is the unidentified “Kingpin” leading it.

Authorities say they had no choice but to probe the highly-respected CEO for answers. After a thorough search, no solid evidence was found to support the claims, leading the police department to back down from pursuing any further investigation against Fisk and the so-called “Kingpin” gossip.

Despite the recent allegations against him, Fisk has made it clear he’s untroubled by them; the magnate jetted off to Japan to continue negotiations with potential partners for overseas development plans.