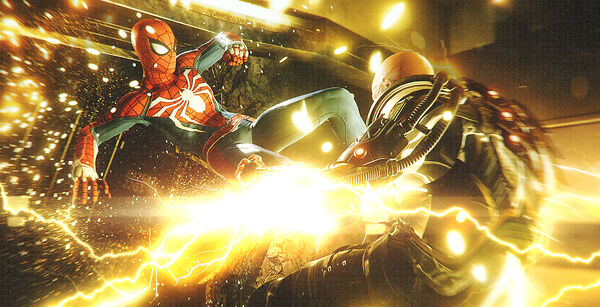 Electro was apprehended and delivered to his own special cell at the Raft after a high-voltage romp through the city with Spider-Man. Inside sources say prison officials left nothing to chance with their new electrifying inmate, claiming his cell looks straight out of a sci-fi film. Surrounded by non-conductive PVC pipe-bars and lined with rubber flooring, Electro won’t be able to cause so much as a static shock. Citizens once living in fear of the superpowered perp can now rest easy knowing Electro will serve his sentence in low-power mode.

Mayor Norman Osborn has announced a third run for Mayor. After City Council passed a bill — ushered through by Mayor Osborn — removing term limits on the Mayor’s Office, Osborn’s been cleared for a shot at an unprecedented third straight term.

“The city has flourished under my administration. I believe we can achieve greater things if elected once more,” Osborn declared to the press.

Osborn’s new platform focuses on improving citywide security, with promises to “end the city’s dependence on masked vigilantes like the Spider-Menace” by providing better “support” to the overwhelmed police force, alongside other initiatives.

He hasn’t let us down. Could a third term be the charm for his administration?

The Daily Bugle says goodbye to its longstanding publisher J. Jonah Jameson. After decades of leadership, the fiery, headstrong newsman turns his attention to podcasts.

Jameson dedicated his career to building The Daily Bugle into what it is today: New York City’s premier newspaper, publishing hard-hitting news that delivers the truth other papers lack the tenacity to print. His fearlessness for compelling journalism earned him multiple top national accolades and a prestigious book deal.

No matter how he does it, Jameson vows to continue delivering his trademarked brand of gutsy news to the citizens of New York.

Next to the word “monopoly” is a picture of Wilson Fisk, CEO of Fisk Construction. His cranes dominate the skylines while his branded steel beams support the skeletons of the majority of NYC’s highest skyscrapers. Since the city is essentially his, Fisk looks overseas to expand his empire.

Some worry about his global aspirations, but who cares when he single-handedly rescued our middle-class, blue-collar workers? Hundreds of once-unemployed New Yorkers now work, while businesses worldwide flock for space at any of Fisk’s commercial towers.

Fisk is so successful, he even pours his own earnings back into new projects. While this sounds shady, it’s better when a self-made mogul self-finances in lieu of using taxpayer dollars.

He can grow his company across oceans and worlds, if he wants. With so much of the NYC skyline influenced by the mogul, this is Fisk’s world. We’re just living in — or, in reality, renting — it.

Bryan I., Manhattan: “I bet he’s some ex-circus freak who misses the thrill of the trapeze. I mean think about it, he swings from building to building like it’s all he’s ever done.”

James S., the Bronx: “I don’t know who he is but I know what he is: a criminal. If Spider-Man really is on our side, he’d show his face. Otherwise, he’s no better than the masked crooks he captures.”

Jacinda C., Midtown: “Ugh, he’s probably some gym rat who just wants to parade around showing off his gains.”

A string of robberies targeting NYC’s elite have police scratching their heads. Who’s foolish enough to target New York City’s rich and powerful? Apparently, someone familiar with sophisticated home security systems, the likes of which are normally reserved for art museums and diamond importers.

Authorities lack any leads confirming whether the break-ins are executed by a single thief or a ring of criminals. Inside sources claim the culprit leaves a “calling card” at each crime scene, at least confirming police hunches that it’s no common crook burgling our city’s elite.

The city’s wealthiest families demand justice, cranking the heat up to full blast on police to crack this case. And if they continue to fail, some suggest victims will invite outside forces to demystify the million-dollar bandit and bring them into custody.