Something Old, Something New mission

Battle Focus
Hybrid biomembrane rapidly generates Focus for a short time.
The Advanced Suit is Spider-Man's primary suit in Marvel's Spider-Man. It is unlocked through story progression, and costs 1 Backpack Token and 2 Crime Tokens in order to be crafted. Peter Parker makes this suit after the Classic Suit becomes damaged in the opening sequences of the game, with Otto Octavius providing the plans for the suit in the mission Something Old, Something New. It comes with the Battle Focus suit power.

Designed exclusively for Marvel's Spider-Man, the Advanced Suit is an original suit created by Insomniac Games in an attempt to modernize the design of Spider-Man's costume while also paying homage to the original design.[1] It is Spider-Man's default suit that he crafts and wears for a majority of the game's story.

After his original suit becomes damaged during a confrontation with Wilson Fisk,[2] Peter heads to his workshop at Octavius Industries to repair it. While repairing the suit, however, he is caught by Otto, who appears to misinterpret it as Peter being Spider-Man's "suit crafter". Thinking he is merely the wall-crawler's assistant, Otto assures Peter that his secret is safe and leaves him to his work.[3]

When Peter falls asleep while working, Otto decides to help him out. Noticing that the suit is damaged, he takes the liberty of designing some improvements to it so Peter can enhance the suit and "help protect Spider-Man". Otto's assistance is vital in introducing the Advanced Suit, which can then be crafted using his blueprints.[3]

After Otto completes his transformation into the villainous Doctor Octopus later in the story, Peter builds a black armor of the Advanced Suit in order to defeat him with the same materials he created for Otto's weaponized arms.[4] 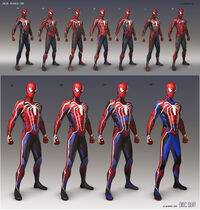 The Advanced Suit's design is based on athletic wear and compression clothing.[1] The most prominent aspect of the suit that distinguishes it from other Spider-Man suits is the white spider symbol. While the suit retains the classic red and blue color scheme, it features a large white spider on the chest instead of the traditional black. The spider has long legs and ends at the thin blue piping of the suit. The shoes have also been modernized, now featuring a sneaker-style design instead of knee-high boots.[1]

The suit is equipped with several technological expansions to increment its overall efficiency, having its own built-in camera, radio, and communication system. While wearing the costume, Spider-Man is also odor- and scent-free.[5] Furthermore, the lenses of the suit's mask are expressive and can squint inwards as well as outwards. The lenses have a built-in AR heads-up display system, allowing Spider-Man to analyze his surroundings in great detail; he can also view his web fluid, his current health state, and global position.[2]

In addition to technological enhancements, Peter has also further improved upon the material design of his Advanced Suit, with each of the comprising colors on the outfit actually representing something specific in functionality.[1] The red part of the suit is made out of a reinforced and thicker material, providing Spider-Man some armor and protection, while the blue part adds flexibility.[1] The white bits, which are positioned on his gauntlets, feet, and chest, are carbon fiber, and designed to absorb as much impact as possible, thus offering the most protection.[1]

The Battle Focus suit power, which unlocks with the Advanced Suit, allows Spider-Man to charge up Focus at a much faster rate when activated, enabling him to perform Finishers (

) in quick succession, or heal (